How to make RSA style videos with your class — part 2

A few years ago I published a post on “How to make RSA style videos with your class” and it was a monster of a post.  It wasn’t until I shared the process with other teachers at conferences that I realized what a big process it was.  If a teacher was new to doing projecty techy things it was a project that seemed simply just too big to try–I could see it in their eyes 🙂

This year with our new curriculum we are told what our “performance tasks” will be so I could not pull off doing RSA style videos with the kids like we have in the past…but I decided to go ahead and do them anyway–shhhhh.  Since I would have to squeeze them in I decided to approach it like a teacher who might find the regular RSA style videos daunting, and as a teacher who has little or no technology available in class, and like a teacher like me this year that simply had no extra time.

I would recommend looking back at my first post if you don’t know what an RSA style video is.

If I can summarize RSA style videos in school friendly words, it would be “the visualization of an essay.”  It is great at any point in a unit, or to use to introduce a unit.  It is a MUST MUST MUST that you do one with or before the kids.  Not just because you will be able to better coach them through the process, but because you will learn what a valuable learning experience it is.  You will realize that it is more than just drawing pictures to match words.  In my grad class I have the students make them (please check them out here, you might find something to use in your class).  As one student said something along the lines of, “I found my writing improving because as I was drawing the pictures I was going back to make the writing flow more smoothly, and  each time I attempted it I went back to make my writing more precise and clear.  Drawing the pictures made me really consider what was most important and having to explain them to an audience made me develop a better understanding of what my main point was.”

The videos that we made were a part of a unit on South America, and the Amazon rainforest.  We did a classic sort of “What should be done?” to the Amazon from a few different perspectives and then the kids gave their answer at the end.  We watched a few different videos and used only a couple text sources.

Just to touch on the content a bit….we watched this, then this, and finally this.  I spent a lot of time previewing videos and have to say that I think I nailed the order they were shown 🙂  I think too often videos are shown in class just because they are “on the topic” and with no real thought given to anything other than just show it to deliver content.  In short, the first video made kids fall in love with the Amazon, the second video made kids realize that there are more than animals trying to live in the Amazon, and the third simply put a human face to the struggle.  The first we watched straight through over a few days, the second we watched one of three edited versions I made, and the third we only watch about 30 minute.  At 30 minutes they “got-it,” were asking questions, wanted to know more, and any more of that video would have bored them 🙂  With all the videos we stopped them a lot to talk about what was happening, and all kids have the power to stop the videos at any time.

Throughout the videos and text I decided to experiment and the kids were not allowed to take notes.  All they were able to do was to write down questions, doodle, and draw pictures.  Each video and text I tried something a little different.  For example after one reading the kids had to summarize each paragraph in a doodle and write the domain specific vocab words in a circle around their images.  While it might not look like much to you, each picture was worth a 1,000 words to the artist. 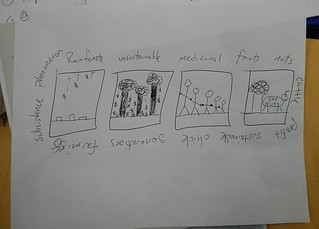 I found that they wanted to talk a lot more about each text and movie doing it this way.  When we shared pictures they were more likely to want to explain to the class why they doodled what they did.  When we watched the movie there was drawing involved, but also they were only able to write questions, not classic “notes.”  What this lead to each day is a natural class discussion and kids wanting to know more about the content rather than just reporting back facts about the movie.  Unfortunately I just can’t locate the images of the other ways we took “notes” with drawings and questions!  The results were shocking though.  For years I have included drawing and doodling in units, but never to this extent.  The kids never complained about “taking notes” and at the end of class or the beginning of the next they were more than happy to share what they had, and each conversation we had as a class covered and had them recalling the content that I would have included in a classic “watch the movie and answer the questions.”  Problem with that method is that kids game the process and only watch for the answers on the paper and ignore everything else!

The power of drawing and doodling is a great summer research project 🙂  After doing this I stumbled onto an article about doodling in schools and I never realized that it was something that many have researched and it is a “proven” method of note taking.

At the end of the videos and text the kids all had to do the classic school essay on what they would do to the Amazon as dictated by our school system, and then they formed groups to make the RSA style videos.

They first got together to finalize their claim (yes, we no longer call it a thesis) for the group armed with their essays which lead to some neat conversations.  Everyone did not have to necessarily agree, because if there was one kid who disagreed with everyone their view could simply be brought into the video as an alternative perspective.

Then they started writing their script, first on regular paper with images doodled under their writing. 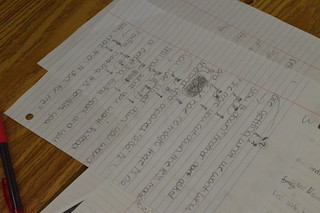 Great discussions ensued on how to best visualize what they had written, and you have to remember that if I told them to discuss the content I would have gotten very schooly sort of responses and enthusiasm.  When they were discussing the drawings they naturally had to discuss the content and the larger points they wanted to make. 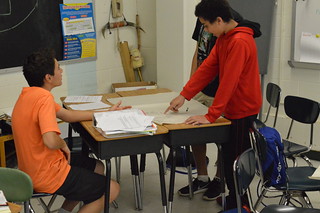 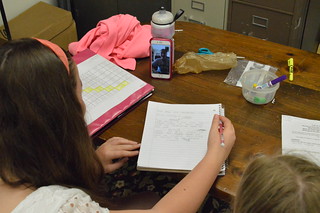 The kids had to take their doodles under the written words and do them “big” on paper first before they filmed.  Absolutely necessary step, and this is not the “dress rehearsal.” 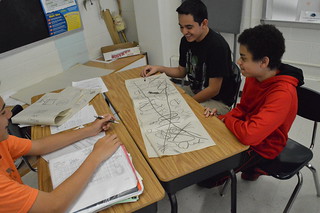 It really forces them to see the “whole story” and see how one image flows from one to another.  By doing it on paper they also have a record of the entire thing so when they are done and they want to talk about a certain problem it wasn’t erased as it would have been on a whiteboard. 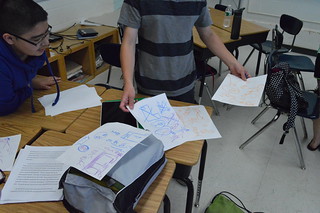 The kids have the option of doing it on a whiteboard or big chart paper.  We have a big whiteboard in class, and I have smaller whiteboards.  You can buy a 4’x8′ shower board for around $12 and have them cut in half twice and you get four 2’x4′ whiteboards. I just went to look for a link to one and see that even home depot is calling it “marker board.”

I left out something key…these were supposed to be RSA-lite style videos right?  The videos the kids were going to take of themselves drawing were going to have zero editing.  Zilch.  That means that narration gets put in while filming, and that the film would not get speed up like in real RSA videos so all drawing would have to be done at the speed of narration.  This meant that the kids had to choreograph their hands and markers to match the speed of the narration. 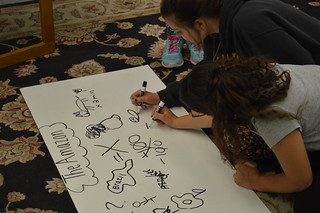 No music would get added, and the kids would film and then upload to out youtube channel directly from their phone, no transferring of files to me.  This was made possible by the fact that we have enough kids in each class this year who have smartphones.

We had one day of dress rehearsal, and then one day to film.  A reminder sheet given to them on the day we filmed.

We have become very creative in how we support the phones.

Notice below the paper folded up and placed at the edge of the desk, that allows the phone to not record the legs of the desk.  A stapler is on the other end and then it is all strapped down with tape. 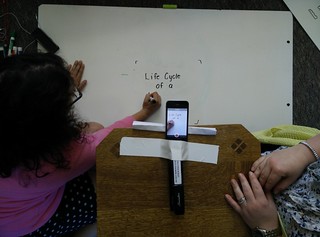 This was a great $10 investment.  A cellphone holder than mounts on any tripod. 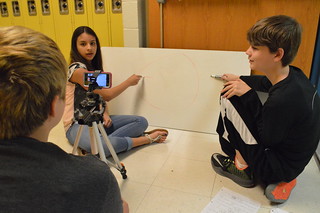 Not everyone wanted to be on the floor. 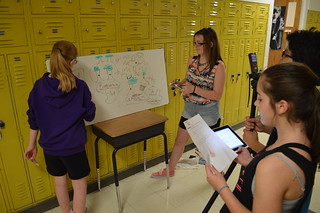 There was some great use of duct tape. 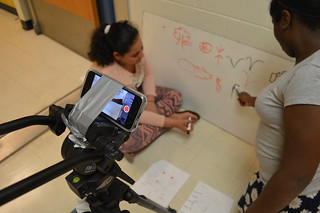 Some kids did get fancy with lighting–notice their drawings hanging from the desk used to guide them. 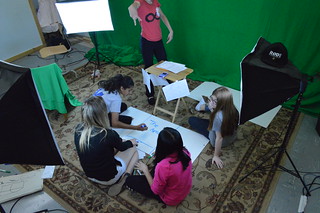 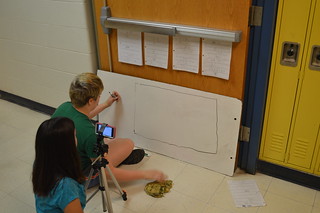 And of course there was the classic phone in book on chair method. 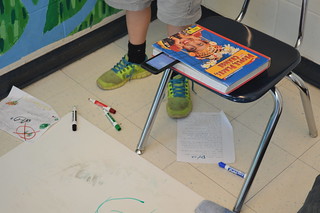 When the kids were done filming they did just upload their files to YouTube and we were done–it was that easy.  Some kids had to upload to google drive first, download on another computer, and then upload.

Finished products were not fancy 🙂 but they worked.  As you watch these you have to remember that I am happy with these for the 7th grade kids that I have.  Results will vary based on your demographics, and what the final video looks like is not the most important thing.

You can do this with chart paper, big construction paper, crayons, regular markers, etc.  You can even do one video for the class and just give each kid a different part and film it all at once with one single camera. 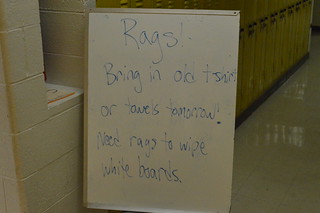 With RSA-lite videos the final product is not fancy, but the learning is.

Story behind video above is here…great to share with class to give an example about how RSA style videos are not just “silly” class projects, some people have made them a career!

The latest posts on Blogush: